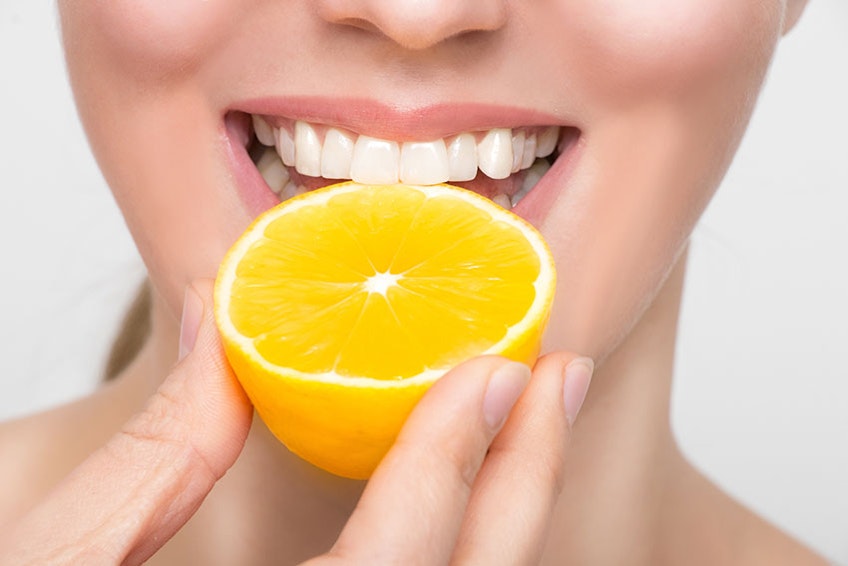 A bright smile that reveals healthy pink gums and dazzling white teeth wins hands down over beauty products for knocking off the years. And when you’re smiling it lifts the jowls so you get an instant facelift too!

It may be simpler than you think to keep your gums and teeth healthy, regular brushing and flossing go without saying but vitamin C could be your biggest ally in the fight against gum disease.

Looking after your gums is essential if you want your teeth to remain firmly rooted in your mouth. A surprisingly large number of adults already suffer with gum disease; in fact it is among the most widespread inflammatory disorder globally and is a major cause of tooth loss.

The biggest problem is plaque which is formed due to an accumulation of unhealthy bacteria, mucus and other particles in the mouth. The longer it remains on the teeth the more damage is done leading to gingivitis which causes inflammation and bleeding gums.

Gingivitis is a relatively mild form of gum disease which can be reversed with good oral hygiene. However, untreated plaque hardens and forms tartar that simple brushing cannot remove. This could eventually lead to periodontal disease - an inflammatory condition of the bones and ligaments that support the teeth.

Your gums, bones, skin and teeth are held together by connective fibres that consist mainly of a protein called collagen. Connective fibres keep the tissues and blood vessels strong in order to anchor your teeth into your gums so a steady supply of collagen is essential. This is only possible with the help of vitamin C, which together with the amino acids proline and lysine is vital for the formation of collagen.

Recent research indicates that low vitamin C status may influence the early stages of gum inflammation and bleeding. As well as this patients with the more advanced stages of gum disease have been found to have low levels of vitamin C due to bleeding.

Smoking can make matters worse because of the oxidative stress it places on the tissues and ligaments that support the teeth. For every cigarette smoked the body loses around 25mg vitamin C. If you’re a frequent smoker you can see how vitamin C rapidly becomes depleted.

Because vitamin C is such a powerful antioxidant it is able to prevent and reverse oxidative damage while strongly stimulating the natural antimicrobial properties of the immune system offering further oral protection.

Given that gum disease affects 50-80% of all adults, common sense would say that vitamin C is fairly indispensable if you want to keep your gums healthy and avoid periodontal disease.

Is Scurvy On The Increase?

Scurvy is a historical disease caused by vitamin C deficiency that we don’t hear much about today but is still affecting parts of the population. It is a serious condition whereby the body is unable to manufacture collagen and connective tissues due to a lack of vitamin C.

Even a moderate deficiency in vitamin C can lead to interrupted collagen synthesis which is surprisingly still being seen today in the modern world. From 2009 to 2014, NHS hospital admissions related to scurvy went up by 27%.

With impaired collagen production the body simply begins to fall apart - maintenance and repair grind to a halt and joints begin to wear down as tendons shrivel and lose strength. Weakened blood vessels rupture causing bruising and bleeding and the bones and ligaments supporting the teeth deteriorate culminating in tooth loss.

Many adults consume insufficient vitamin C, particularly the elderly, the mentally or chronically ill and those who smoke, drink or abuse drugs. According to statistics, 50% of elderly people living in institutions have a vitamin and mineral intake less than the recommended daily allowance.

How To Be Sure You’re Getting Enough Vitamin C

The government recommends we eat 5 portions of fruit and vegetables a day and it cannot be emphasised how important this is to ensure you obtain sufficient vitamin C in your diet. No need to restrict yourself to fresh fruit and veggies though, frozen versions are sometimes more convenient and can be just as nutritious.

Get into the habit of adding more vegetables when you’re preparing meals. Soups, salads and casseroles are really easy ways to up your veggie intake. Smoothies and juices that you can sip throughout the day are a delicious and nutritious way to boost your fruit intake too.

If you really want to supercharge your vitamin C intake, some foods have higher levels than others. Choose from the following list to guarantee a big boost of vitamin C:

Support Your Diet with Supplements

If you find it hard to get enough fruit and vegetables into your diet or ill health prevents it supplements are an easy option and can give you peace of mind.

Be picky though….standard oral vitamin C supplements are not well absorbed because they are unable to withstand the digestive constraints that vastly limit the level of vitamin C that can enter the bloodstream.

Getting your body to accept a really high level of vitamin C is easier if you take a liposomal supplement like Altrient C. The uniquely protective delivery system makes sure your body absorbs almost 100% of the vitamin C so that it reaches the cells and tissues that need it most.

As an added bonus vitamin C also helps to regenerate Glutathione another major antioxidant. Not only is Glutathione shown to be deficient in people with periodontal disease, studies have also found it has a significant effect on reducing wrinkles. Boosting the anti-ageing benefits of a bright white smile!

It's all about fitness at Abundance & Health at the moment, so we caught up with Altrient Ambassador, Robson Lindberg to get to know him a little better and to hear some of his fitness wisdom. You can follow Robson and his adventures on Instagram.